The Department of Cultural Affairs in Taipei City sent out the WDC Taipei 2016 “International Design Open Call” in 2015, and from the 49 international submissions selected six proposals that could help establish a bottom-up urban development roadmap: “The Food Project,” “Citizen of Tomorrow,” “Green Ocean Project,” “Taste of Home,” “Next Design for Health Care in Taipei,” and “(Re)Create Taipei.” These proposals reflect the four core principles of WDC Taipei 2016: quality of life and health, eco-sustainability, urban regeneration, and smart living. The city aims to stimulate urban evolution and international exchange through design, so that public agencies will release public resources and open up to citizen participation, inclusive governance, and city building.

Collision of Park Cultures in Taipei and Spain

Spanish design team Basurama participated in WDC Cape Town 2014, where they used unwanted plastic bags to create large installation entitled Inhabiting Plastic Oceans, raising the awareness in Cape Town about plastic bags polluting the ocean. For WDC Taipei 2016, City Yeast, a design team that has long cooperated with the city government, asked Basurama to join them for a joint project as the teams share similar ideals and methods. They hope to liberate Taipei’s public spaces by utilizing recycled or waste materials and a design model developed to involve local citizens, further exploring the functionalities and practicality of future neighborhood parks. In March, seminars and workshops were held at TAF, and during a two-day workshop with participation by 80 members of the public, designers used unwanted plastic bags donated by the public to create a five-meter tall, eight-meter wide “Bubble Station”. The Bubble Station accommodates up to 100 people standing up, and has become a workstation for the re-imagining of neighborhood parks.

During the seminars and workshops, Spanish design team Basurama discovered cultural differences Taiwanese and European attitudes to child safety: Parents in Taipei fear their children might come to harm in public facilities; while on the other hand, European parents want their children to be able to explore and experience their surroundings, including using public facilities and taking care of themselves, even if that means a few bumps and bruises. From March to June, the Bubble Station appeared at random at TAF, National Taiwan Science Education Center, Taipei University of Technology, and underneath Civic Boulevard Expressway. Members of the public were invited to enter the station and take part in activities and show off their own collections. Meanwhile, their views were canvassed on a wide range of issues relating to public space, such as facilities and regulations in existing parks, and how they imagined future parks and their possible users. The aim is to turn on its head the conventional notion of standardized parks, all alike and designed uniquely to meet safety regulations, and develop a parks system that builds facilities that reflect users’ ideas. 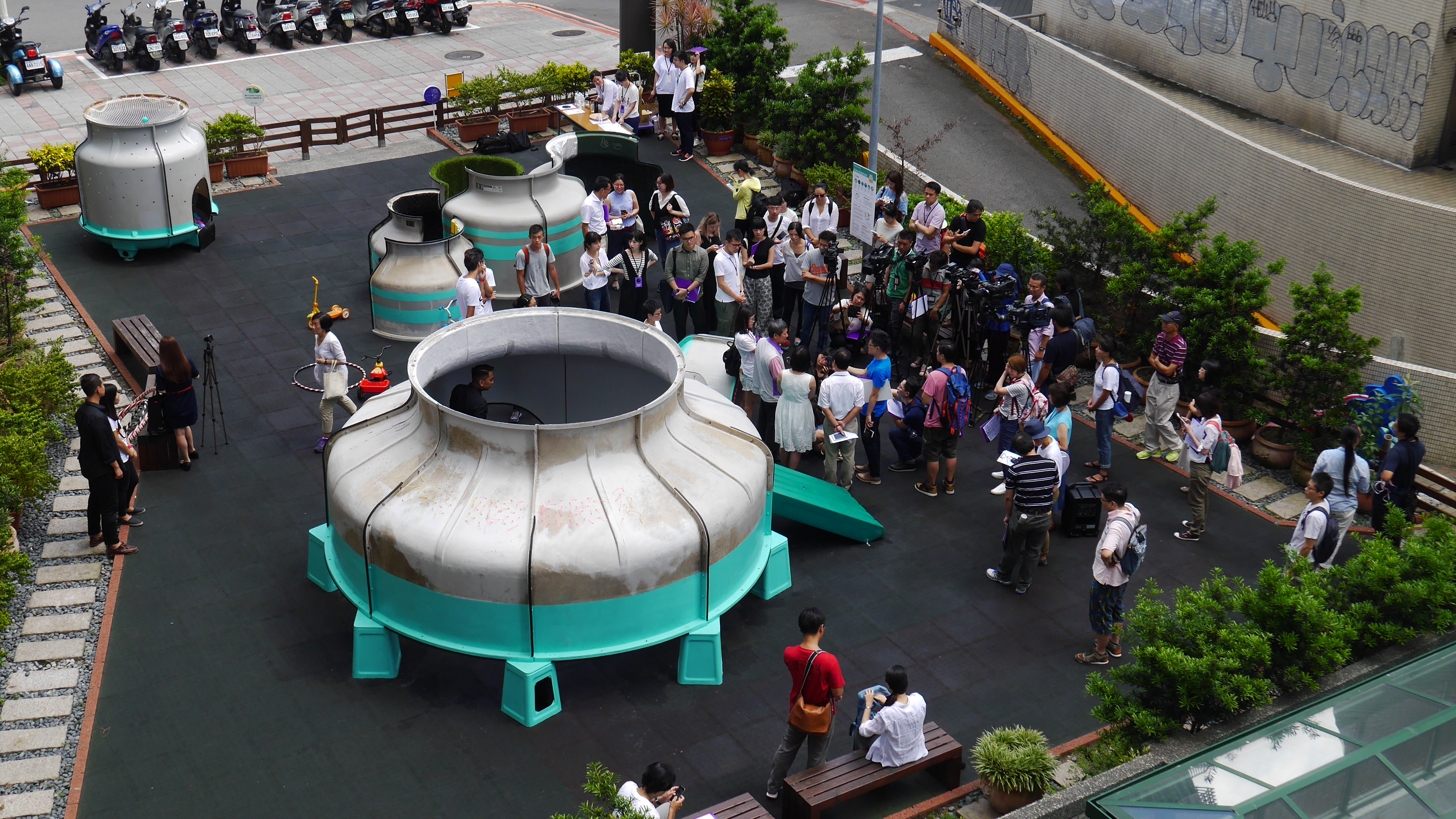 Basurama came to Taipei again in July and together with City Yeast transformed two fractional lots—the empty Zhengyi Post Office lot on Section 3 of Zhongxiao E. Road (Zhengyi Village) and the park under Civic Blvd. Expressway (Chengan Village)—into the “Kids Ambition Park” and the “Swings Park.” Before the reconstruction, the design teams held design communication meetings with Chief Pan, Chief Lee, volunteers, and residents of the two neighborhoods to improve public understanding of the impetus for the work and the management of public spaces, and to ensure the team did not design facilities that would not meet public needs. The reconstruction used recycled waste materials in the hope that even the highly developed Taipei City will take sustainability into consideration in its urban development. 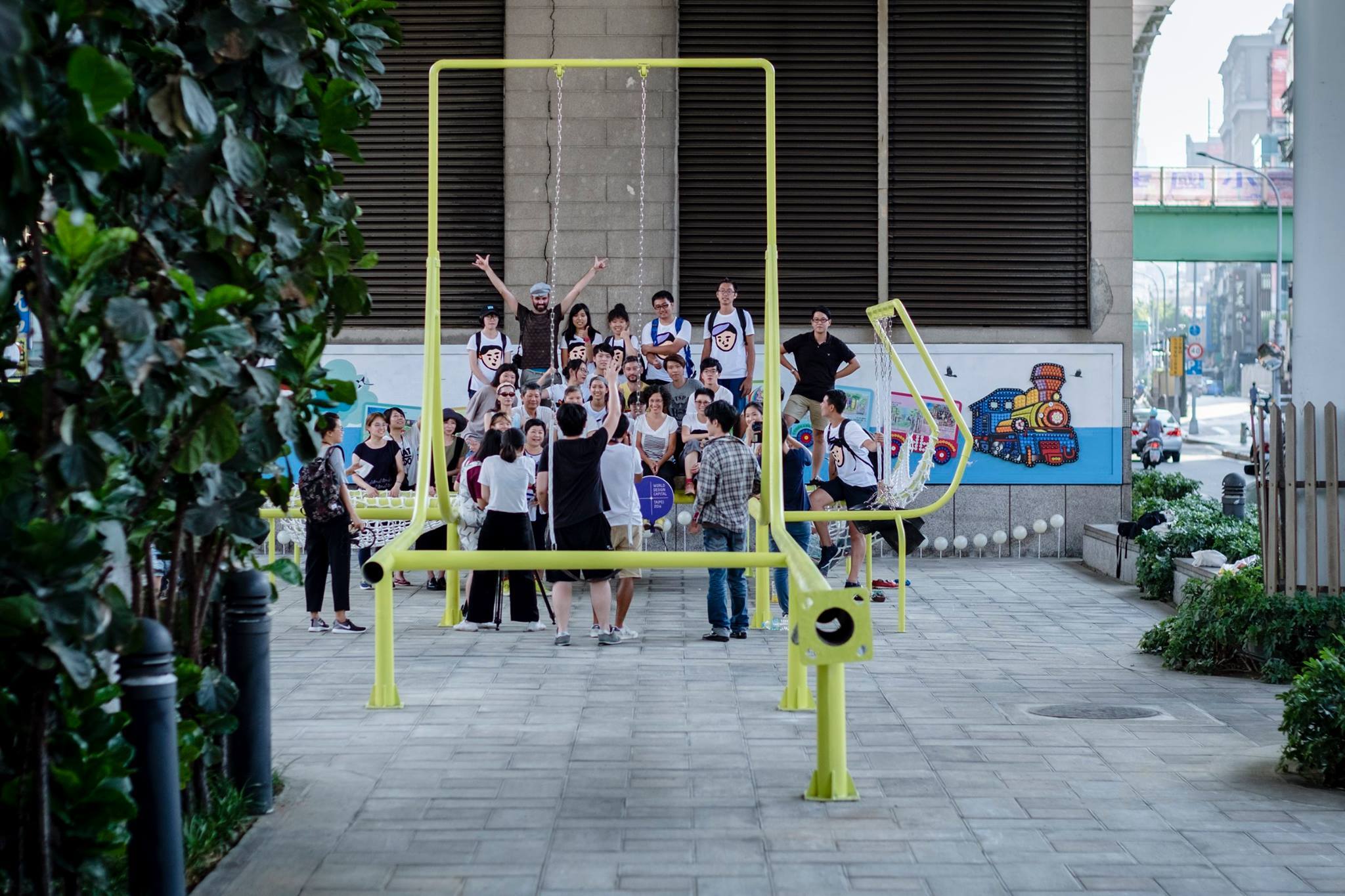 “Kids Ambition Park” is near a kindergarten next to Zhengyi Post Office. The teams used a large cooling tank donated by Liangchi Group, cutting up and reassembling the large bottle-shaped water tank with unwanted park equipment provided by the Parks and Street Lights Division. In this way, they turned the vacant space next to the kindergarten into a park where children can explore materials and space. The teams hope that, playing in the park will open children’s minds to a range of stimuluses, allowing them to physically explore their environment and become ambitious young citizens.

“Swings Park” occupies the enormous, elevated noisy space underneath Civic Boulevard Expressway. Designers repurposed the structure by welding together unwanted lampposts from the Parks and Street Lights Division to create an elevated swing park, where people of all ages and genders can enjoy physical activities underneath the expressway. Because of the noise of the traffic, users do not have to worry about disturbing neighbors and can let themselves go.

During construction of the two parks, the design teams also spread the word and invited members of the public to get involved. Participants included welders, design and architecture students on summer vacation, and enthusiastic residents from surrounding neighborhoods. The creation of these two new neighborhood parks embodied the spirit of public participation and inclusive governance through design. WDC Taipei 2016 also hopes to use design to come up with new visions and a new sustainable system for the city’s development, building Taipei into a sustainable and competitive city.

City Yeastis part of AGUA Design team’s project in 2006, Global Design Concept. We joint force to apply creativities to make this place and its culture unique; the participating designers, interior designers, industrial designers, movie makers, poets, and writers are all like yeasts, cultivating and spreading the ideas.

surama is an artist collective dedicated to research, cultural and environmental creation and production whose practice revolves around the reflection of trash, waste and reuse in all its formats and possible meanings. It was born in the Madrid School of Architecture (ETSAM) in the year 2001 and, since then, it has evolved and acquired new shapes. Our aim is to study those phenomena inherent in the massive production of real and virtual trash in the consumer society, providing different points of view on the subject that might generate new thoughts and attitudes. We find gaps in these processes of production and consumption that not only raise questions about the way we manage our resources but also about the way we think, we work, we perceive reality.