In 2020, the Taipei Culture Awards entered its 24th year. The award was set up to recognize “long-term focus on social design, cultural diversity, and promotion of equal access to cultural resources.” The four winners were: Capital Ballet Taipei, which has been deeply involved in ballet localization for 30 years; cellist Chang Chen-Chieh, who is dedicated to the promotion of music; Kung Shu-Chang, an architect dedicated to urban renewal; and national treasure Wen Shia, a singer who has had a profound influence on Taiwanese pop music.

Over the years, the four winners have amassed cultural heritage in their different forms of artistic expression. Each of these cultural torchbearers is entirely unique, and together they form part of Taipei’s profound and diverse charm. Below we take a look at how the winners carved out careers in their fields.

Ballet always brings to mind Russia. But classical dance companies are found not only in Russia and Europe, but also in Taiwan. This is the story of Capital Ballet Taipei, a story that to date has spanned 30 years.

Founder Hsu Chin-Fong has a degree in economics from National Chengchi University rather than a background in the conservatoire. We asked Hsu what he thinks is ballet’s most fascinating feature.

“Loveliness! Beauty! It’s a beautiful artform!” As he spoke, his eyes shone with the glow of his first encounter with ballet all those years ago. Then he paused, as if talking about ballet had turned him into a young man in love who couldn’t stop smiling.

“I’m 67 years old now, and I really feel happy to be able to engage in beautiful work.” Or maybe it’s because of this unwavering love that they have become the oldest ballet company in Taiwan, that they have brought ballet further into towns and campuses, bringing people closer to this powerful and expressive dance form that can be both abstract and narrative.

It’s true that during these 30 years, the company has experienced ups and downs, funding shortfalls and a dearth of dancers, but the company has come through these challenges one by one. But Hsu still carries in his heart a dream of how great it would be to one day turn the dance company into a real institution and set up a ballet school dedicated to the training of new talent.

Such is the profound vision of the head of the company. Hsu has always wanted Capital Ballet to find a different way to localize itself. Since its founding, the dance company has choreographed innovative works every year, worked with veteran dancers, combined dance types from different fields, and produced more than new 80 works. Their efforts were recognized when they went abroad for the first time and won praise from the New York Times head dance critic Anna Kisselgoff and European dance magazine Dance Europe as “Romance and Folk Tales In a Troupe From Taiwan” and “the true Taiwanese ballet”.

Hsu’s slight shyness belies strong ambition, and he confidently tells us: “I want Capital Ballet to one day become a symbol for Taiwan and the pride of Taiwan.” 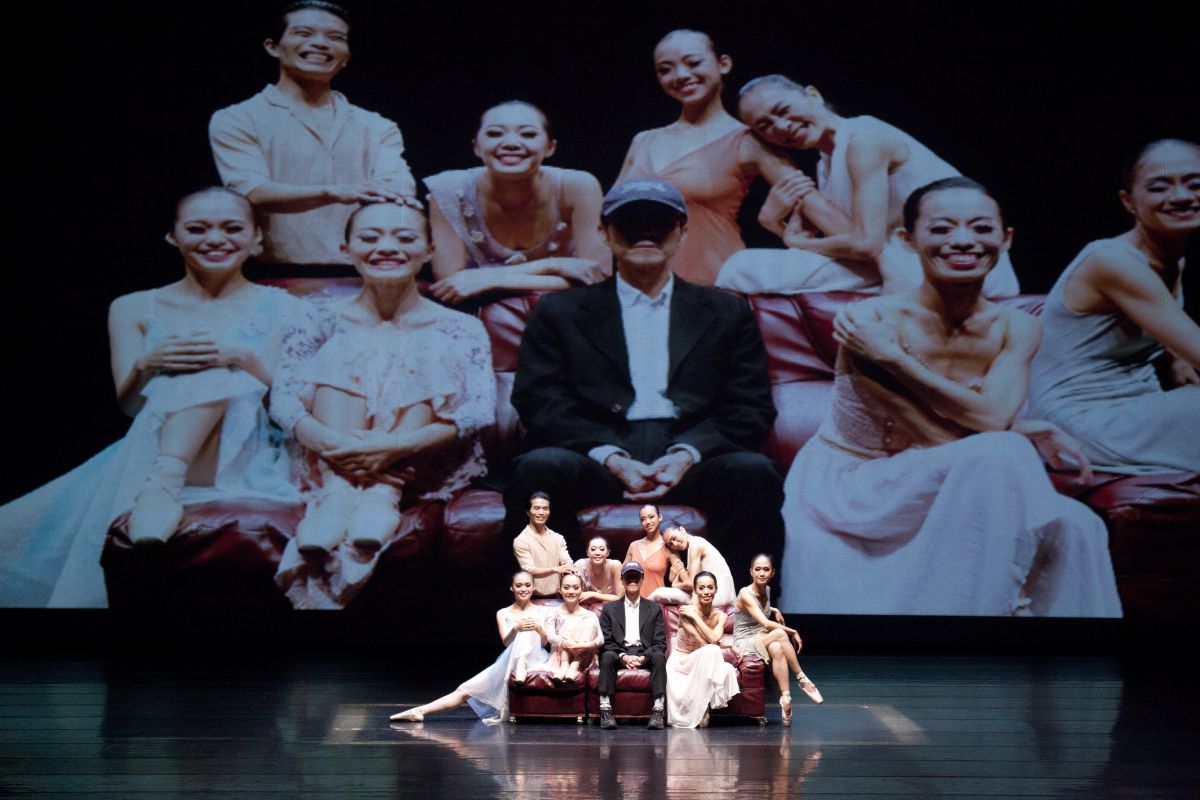 Every day I wake up bursting with curiosity and enthusiasm: Chang Chen-Chieh

When cellist Chang Chen-Chieh speaks, his excitement swells and swells and gradually fills the room, pulling at your emotions. It’s contagious. It’s like listening to a symphony. Perhaps, as Chang said, “When you have music in your life, it changes how people receive you.”

Chang, who started learning the cello at the age of 7, chose this instrument as his “the most important partner in my life.” But Chang is no ordinary performer. He walks alone in the world of a single instrument, senses always open, full of curiosity, and loving to share. In his 52 years playing   ,, he has made room for encounters between cello and many other art forms.

That’s how he came to share a stage with a puppet show while playing Vivaldi’s Four Seasons and how he came to combine classical music with meatballs and braised pork on rice. He has also played against the background of the waters of Liwu Creek, the Tang-style building Changchun Shrine, and Taroko National Park. He even staged a music festival in the gloomy tunnels of Kinmen, with musicians playing on board floating stages and the audience listening to the unique acoustics of this “natural concert hall.” 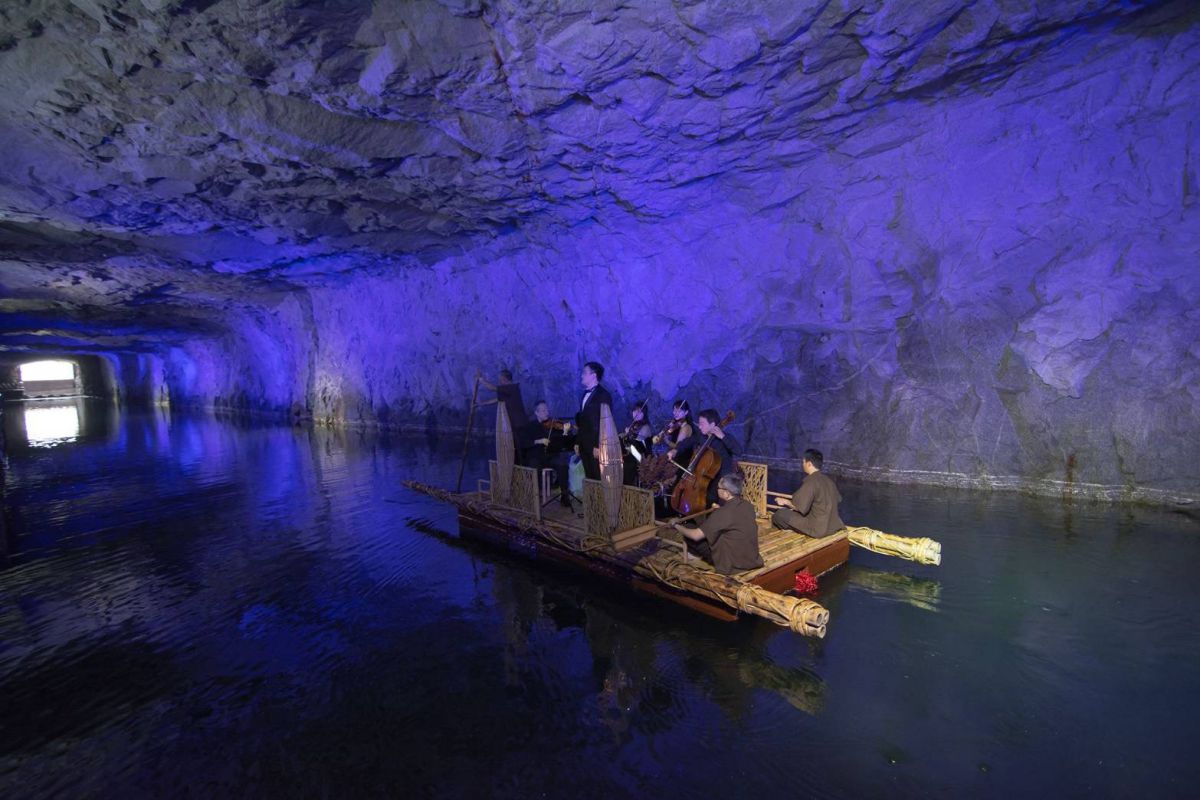 Chang’s free-spirited whimsical thoughts all come from his own life and the way he lives it. And he is always full of enthusiasm. “When I get up in the morning, I feel so happy to be able to get up and do lots of things. When I’m cooking or shopping, or walking along the road, I notice the color of the sky is different today, or that building is unique.” Chang looks back over his life, and the joyful images pour out from his mind and accumulate before the listener, inspiring people to go out and take a look at the world outside.

“When your life is full of curiosity and enthusiasm, you lead a different kind of life,” he says in summary, like God laying down a truth. With his driving enthusiasm, he’s able to keep making his case to the powers that be for six or seven years, if need be, and to try different ways to make his dreams and creative impulses reality.

So what’s next? Chang is someone who always lives in the present and makes no plans for the future. Perhaps it’s like when his daughter was born and he began to work on staging a parent–child concert where it’s children who are in charge and are the emotional center. Inspiration and opportunity permitting, Chang wants to do a concert in space or underwater. And there’s probably no one who can tell him no. 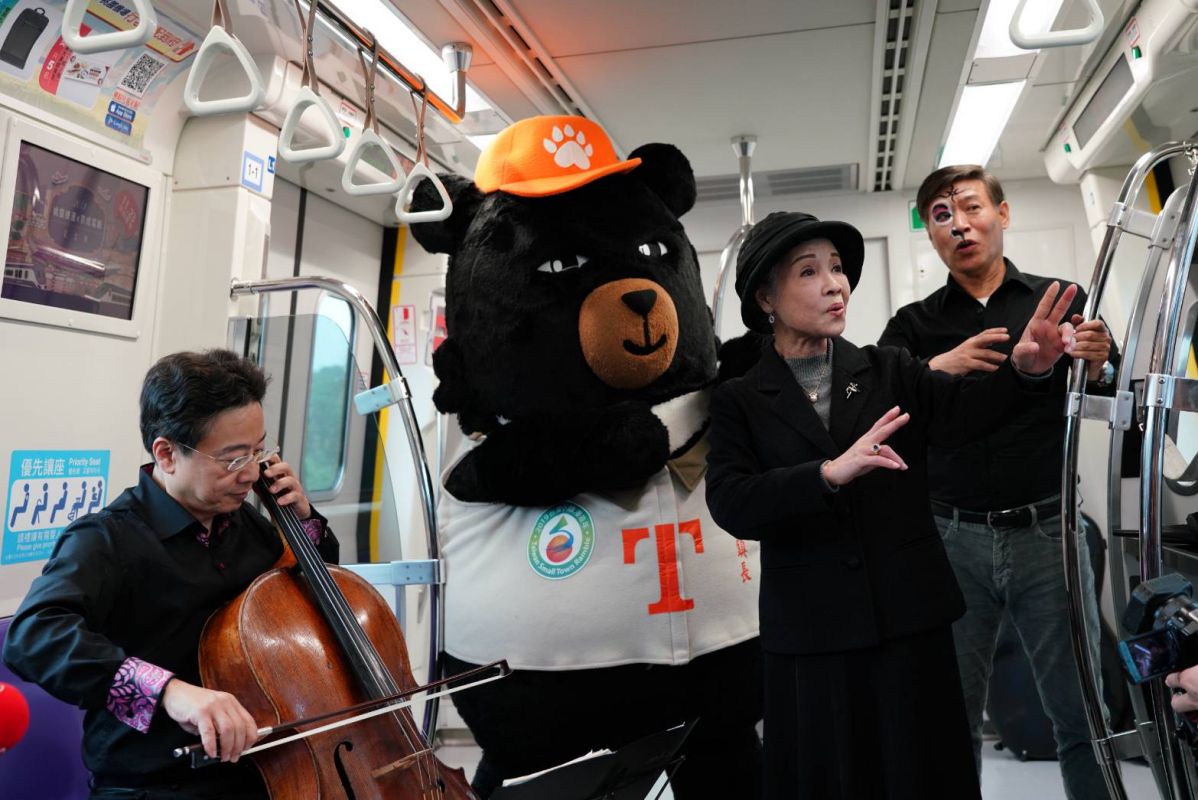 When one thinks of Kung Shu-Chang, it’s not only his profession as an architect that comes to mind. After all, over the years Kung has done so many things for the city apart from architecture—helping the local community tear down the walls of the former Air Force Command Headquarters in downtown Taipei, designing Taipower Company’s D/S 1 Exhibition, and re-designing the Military Dependents’ Village in Hsinchu. All of these go far beyond simple architecture by using design thinking and tools more broadly to solve problems.

“Design is meant to change the space, change the environment, change the city.” This is how Kung sees his professional role: not limited to mere changes in volume and form, constructing buildings that people can only look at or use. Instead, he takes an overview of the whole era in cultural context so that design can enable people to “work together and even redefine our epoch or change the social environment.” It’s social movement as relay race. 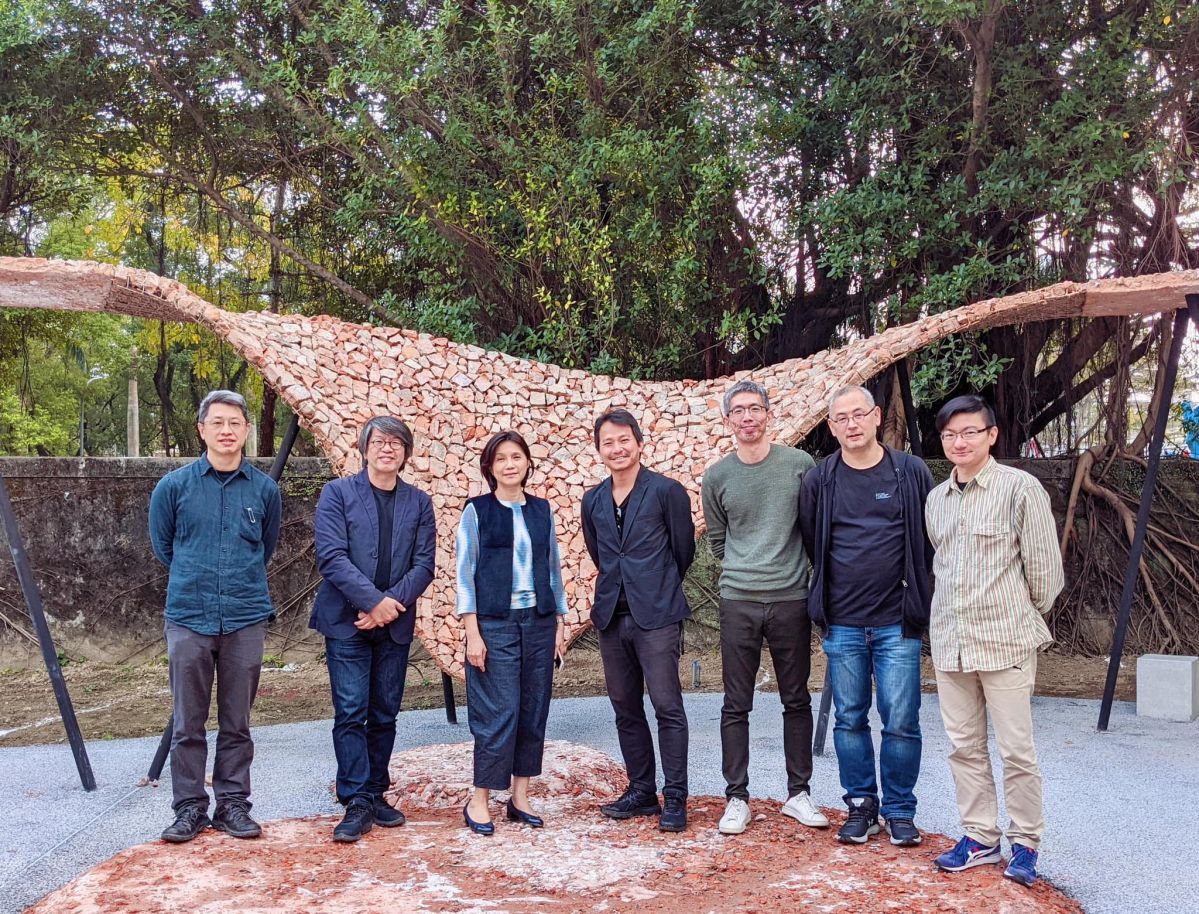 The red brick walls of the former Air Force Command Headquarters were torn down to provide materials for an experimental workshop titled Red Brick Futurism. Image provided by Kung Shu-Chang.

An intellectual and an optimist, when Kung talks, his positivity is apparent. He stays focused on the key issues of the present and near future, with a core focus on change. Kung is chasing a utopia he imagines as “openness, tolerance, dynamism, and mutuality.”

As well as doing practical groundwork to bring the world closer to his ideal, Kung has also turned to education. He believes that by having strong expectations of their students, teachers help them steadily build up core professional skills but also open up the way they think. Teachers guide students to put their finger on the pulse of today’s world and understand the role their profession plays and the challenges or problems they face. In this way, they won’t waste their energy going down the wrong path.

It’s not only in school that Kung cultivates talent. Every day when he’s out and about, he keeps his eyes open for strong contenders. “Almost every day, I’m trying to think up missions they can do together.” Kung himself comes across as someone who would love to dash off on an adventure, searching far and wide for awesome allies who can use their powers and influences to work together, and together transform the world, starting from the city’s lowest rung.

Kung Shu-Chang in 2014, heading the NCTU Graduate Institute of Architecture as they represent Taiwan in the Solar Decathlon Europe in France. Image provided by Kung Shu-Chang.

A Life of Song—Wen Shia

“When you think of your hometown, the tears flow…” So goes the song “Mama, please take care of yourself,” one of the classic songs that Wen-Shia wrote and sang all over Taiwan. All Wen’s songs inspire memories—“Hometown at Dusk,” “Night of the Green Island,” “My Beloved”… But Wen Shia is not his real name.

Born Wang Ruihe, Wen Shia took his stage name from the Tainan clothing store his mother ran. Having inherited his mother’s creativity and love for pop music, while studying music in Japan Wen Shia also learned to play lap steel guitar and sing pop music. This enabled him to set up his own band, playing and singing, and paved the way for his dominance of the Taiwanese pop music scene. 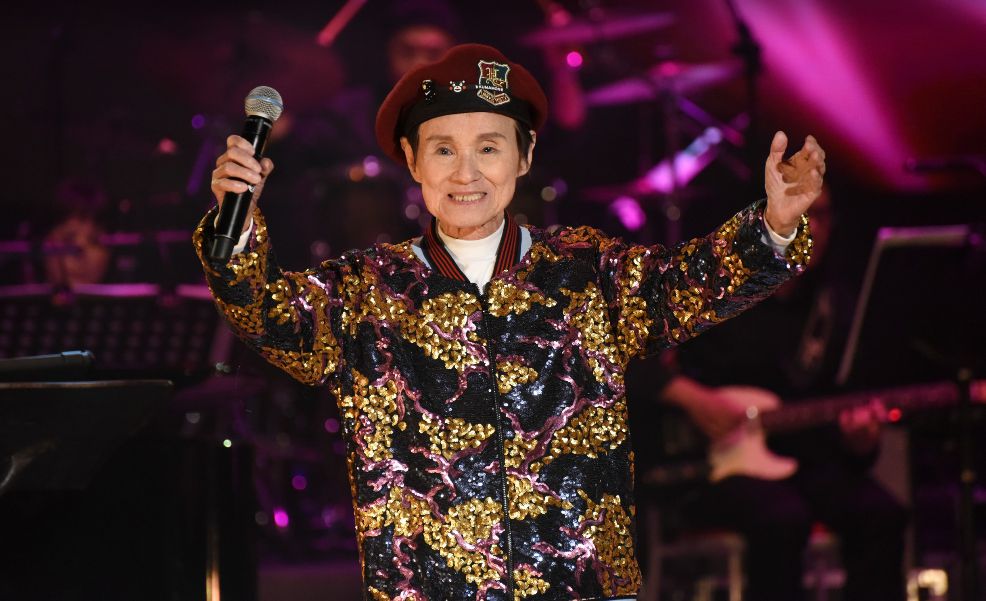 Wen Shia has been playing concerts for many years to promote Taiwanese-language songs. Image provided by Wen-Shia.

One might say Wen Shia’s success was fate. He was writing music and lyrics at a time when there was a demand for songs in Taiwanese. Because the songs came from his own emotions, they also spoke to all sorts working of people such as flower sellers and sailors. Reflecting the aspirations of the Taiwanese people at that time, his songs moved countless listeners.

Wen also appeared in Taiwanese-language films in roles written especially for him. With his mother’s encouragement, Wen went into film and he caused a sensation. And just as his songs drew imitators, his films also started a trend. Wen was so successful that he and his four band members drove the first British-imported convertible in Taiwan.

This is also why, when Taiwanese-language music was being smothered by the “National Language Policy” (which made Mandarin compulsory), Wen was able to maintain momentum by making one Taiwanese-language film per year, and was invited to sing in Hakone in Japan. When martial law was lifted, demand for Taiwanese songs on variety shows and television surged, and Wen Shia, who has been homesick for a long time, was finally able to return to the Taiwanese stage.

Ever since, Wen has continued to tour and promote Taiwanese song, burning with passion like the red flowers of the summer. “The sky is endless!” he says casually: Just gather your strength and seize every moment. “When flowers bloom, butterflies come. When people shine, heaven’s fine.” And maybe that’s the truth.

Singer Bobby Chen talked about Wen-Shia, recalling that even when he was in his convertible, his hair never moved, just like his lifelong obsession with music. Now 92, Wen’s eyes are still bright, and he says that he’ll dare Bobby Chen to sing with him at a concert to ring in the New Year. As he once said: “Singing is a life’s work.” 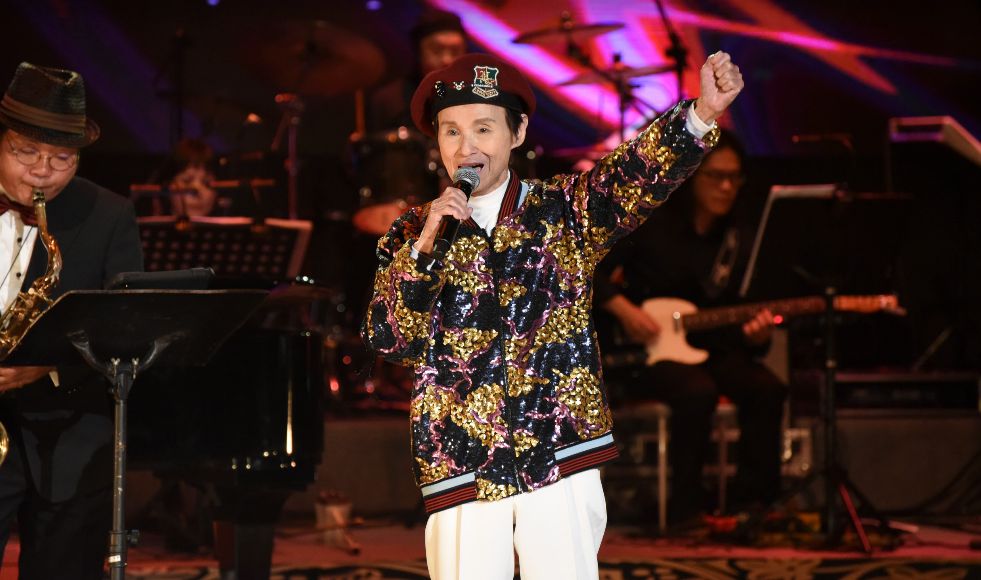 On stage Wen Shia is always meticulously dressed and full of energy. Image provided by Wen-Shia.

When unique and brilliant people showcase and advance their diverse cultural talents, they become part of the urban fabric, and they can cultivate other beautiful cultural talents in Taiwan. The winners of the 2020 Taipei Culture Awards give us many reasons to hope.